Internationally renowned German director Wim Wenders will receive the A Tribute to… Award on October 6.

Internationally renowned German director Wim Wenders will receive the A Tribute to… Award on October 6. 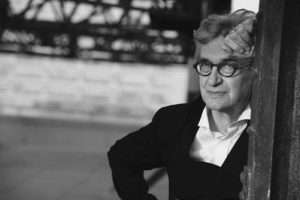 The award will include a retrospective of his work screened in his honour at the 14th Zurich Film Festival.

Wim Wenders will collect the 14th Zurich Film Festival’s A Tribute to… Award in person during the Award Night ceremony at Zurich Opera House on October 6. A retrospective of twelve of the German director’s most important films will be screened in his honour at the Zurich Film Festival. Credit Suisse is the official partner of the A Tribute to… Award.

Wenders, who in addition to his activities as a director is also an author, producer and photographer, looks back this year on five decades of filmmaking experience – a period that has witnessed the creation of numerous award-winning feature and documentary films, many of which highlight questions of identity or tackle socially relevant issues.

Born in 1945, Wenders first studied medicine and philosophy before turning his hand to painting and finally, in 1967, to filmmaking, which he saw as “the continuation of painting in another medium”. He first drew worldwide acclaim in 1977 with his feature film THE AMERICAN FRIEND. Wenders has since worked in Europe, the USA, Latin America and Asia, places where he continues to this day to question the world presented to him with thoughtfulness and curiosity.

The films of Wim Wenders have garnered countless international awards, including a Golden Palm and British Academy Film Award for his feature PARIS, TEXAS (1984), the Best Director Award in Cannes for his feature WINGS OF DESIRE (1987) and Academy Award nominations for his documentaries BUENA VISTA SOCIAL CLUB (1999), PINA (2011) and THE SALT OF THE EARTH (2014). His most recent production, the documentary POPE FRANCIS – A MAN OF HIS WORDS (2018), has just hit German-speaking cinemas.

Launched in 2012, the Wim Wenders Foundation brings together the cinematic, photographic, literary and artistic lifework of Wim Wenders. The foundation is responsible for the digital restoration of a large number of the films to be screened in Zurich. It also offers the annually awarded Wim Wenders Grant for the promotion of innovative approaches to cinematic storytelling.

Said Zurich Film Festival co-founders Nadja Schildknecht and Karl Spoerri “Wim Wenders was seen at the very beginning of his career as a pioneer of New German Cinema. Fifty years later, he is still regarded as one of the world’s most influential filmmakers. We are delighted to welcome him to this year’s Zurich Film Festival and present him with the A Tribute to… Award.”